All these new clothes

All these new clothes 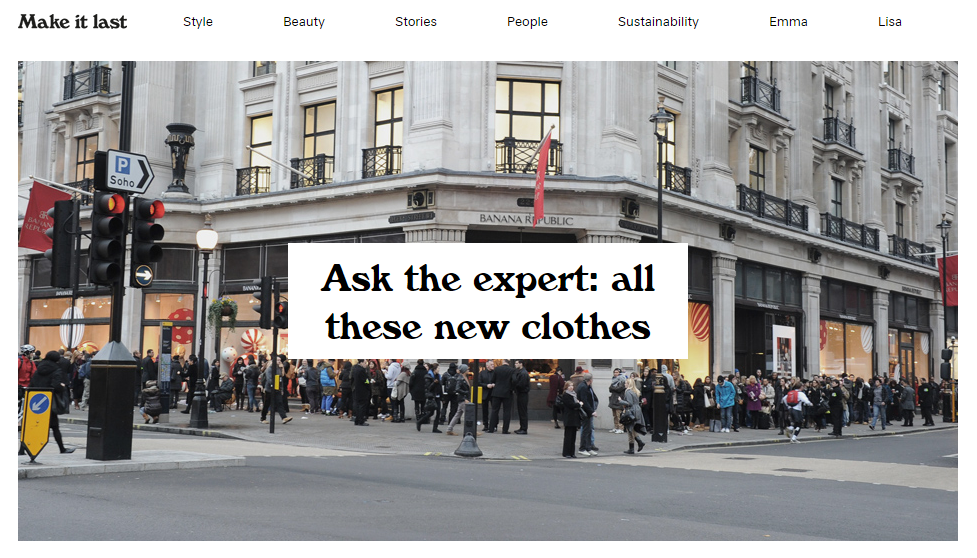 This article was originally written for Make it last (December 15, 2014).

Make it last: “In your opinion, what issues are often neglected in today’s debate on fashion and sustainability?”

Anna Brismar: “One issue that is rarely discussed is the need to reduce today’s enormous annual production volumes of new clothes, shoes and accessories by the fashion industry on the global market. This is especially true for the production of fast fashion items aimed to serve the demands of industrialized countries. The present production rate of fast fashion – often of lower quality and short-lived design – is by no means sustainable. This is evident when we learn about the various harmful environmental impacts throughout the production chains, the poor working conditions in most fast fashion garment factories (mainly located in Asia), and the vast amounts of clothes, shoes and accessories that end up in landfills or are incinerated every year. It is also apparent when we study statistics of annual consumption rates by European countries over the last two decades. In Sweden, for example, we have increased our annual consumption level of textiles by 40 percent, from 2000 to 2009. In Great Britain, the volume of sold clothing has increased by 60 percent between 1995 and 2005.

The continuous increase in fashion consumption per capita in industrialized countries is hardly generated by an increase in people’s basic needs for more clothes etc., nor can it be fully explained by a growing world population, or by a growing middle-class segment. Rather, it is an incautious shopping behavior primarily driven by psychological and sociocultural factors. Various studies have shown that we tend to buy new clothes for various non-functional reasons, for example to express a cultural belonging, to get momentary satisfaction by finding a new trendy piece or shopping at a good price deal, or we shop to cure an emotional unease or even spiritual void. Today, shopping is rarely about filling an actual gap in the personal wardrobe of a “necessary” functional piece, such as a new pair of running shoes (if the old ones are worn out) or a new winter jacket (if the old one is too small or torn).

But, how do fast fashion companies address this trend of increased fashion consumption per capita? Are companies actively looking for ways to promote a more conscious and healthy shopping behavior? Are they starting to question their present production levels and their ambition to “grow” in volumes to meet stockholders’ demand for profit and consumers’ demand for fashion news? Are fast fashion companies today considering the possibility to actually reduce their annual production volumes and finding other means of upholding revenues? Unfortunately, there is still little evidence pointing in this direction. (Yet, new circular business models provide promising possibilities and a number of “more conscious” fashion brands are already working along these lines.)

To add to the case, “the need to close the loop on textiles” has become a common statement among large fashion chains in Sweden in recent years, primarily by H&M. Only in the last year, several Swedish chains have followed the example of H&M and launched their own textile collection initiatives (such as Hemtex, KappAhl and Gina Tricot). H&M are also investing big money in new fiber recycling technologies, primarily as a means to secure their supplies of raw material (textile fibers) for future production. Yet, circularity and sustainability in fashion is not only about creating closed loops of textiles (through reuse, redesign and recycling). Also, it is about addressing the key question “How can we do more with less?”. Only working to promote closed loops will not bring sustainability in the fashion industry. Production rates or volumes, as well as the contents, purpose and beneficiaries of the fashion flows, will have to be considered too. In essence, a more sustainable fashion industry means making wise, careful, efficient and purposeful use of our limited natural resources on a global level, as well as preventing, mitigating or reducing any adverse impacts on the environment (and creating fair and ethical working conditions).

In sum, fast-fashion companies need to start seriously questioning their present production rates and instead begin to explore new ways of making profitable business that do not rely on high/increased production rates (which require high natural resources input). Business models that offer custom-made, locally made, long-lasting and high quality fashion, as well as more sustainable fiber alternatives and toxic-free production, will have to lead the way and become the industry norm in the future. Offering a selective, high quality and more sustainable range of fashion products would also serve the demands of an increasingly conscious middle and upper class worldwide.”

This article was originally written and published for Make it last on December 15 (2014). Republished here with permission.

Fashion on demand – future of fashion

Predictions on sustainability and fashion

2015/01/20
Anna Brismar
Chemicals, Circular fashion, Design strategies, Future predictions, Innovation, Sustainable production, Textile fibers
This article was originally written for Make it last (January 16, 2015) Make it last: “What predictions can you make for the fashion industry in terms of sustainability in the…
Read More

2014/06/04
Anna Brismar
Design strategies, Innovation, Sustainability principles, Sustainable production
Trend analysis, forecasting and developing sustainable business models are key services of Green Strategy. Thus, it is with particular interest that we are following progress in the field. In the…
Read More
Load More