From planned obsolescence to circular thinking

From planned obsolescence to circular thinking

Make it last: A century ago, the fashion industry aimed to produce quality goods that lasted a lifetime. For at least half a century now, the mainstream fashion industry has intentionally produced goods of poorer quality to encourage continuous consumption. Do you see any shifts in attitudes today among the larger fashion brands and retailers in “moving away” from this business strategy?

Anna Brismar: The business strategy that has dominated our manufacturing industry for more almost a century now is called “planned obsolescence”. In essence, it means that a company deliberately designs and manufactures products with shortened lifespans, by making them either worn out, broken, non-functional or unfashionable sooner than necessary (source). Or as explained by The Economist:

“Planned obsolescence is a business strategy in which the obsolescence (the process of becoming obsolete—that is, unfashionable or no longer usable) of a product is planned and built into it from its conception. This is done so that in future the consumer feels a need to purchase new products and services that the manufacturer brings out as replacements for the old ones.” (The Economist, 2009)

The expression “planned obsolescence” was first used in the mid-1920s by critics who questioned the new business proposal of Alfred P. Sloan, then head of General Motors. In order to increase sales, Sloan proposed that the company should change car model design annually to encourage car owners to buy a new car every year (source). In the 1930s, Bernard London wrote the pamphlet “Ending the depression through planned obsolescence” in which he advised the U.S. government to legalize planned obsolescence for consumer articles at large scale, in order to stimulate manufacturing, consumption, employment, and national economic growth. London’s advice had a great impact on the American industry.

Since the 1950s, the strategy of planned obsolescence has played a fundamental role in our modern society, also for the apparel industry. In particular, fast fashion chains and large retailers act upon this strategy to encourage customers to shop frequently, so as to spur revenues. By changing fashion styles often and rather drastically, consumers are encouraged to buy new items although their existing wardrobe may work perfectly. In other words, what is “high trend” today will soon be yesterday’s news. For example, this season’s rounded shoes will be replaced by pointed toes next year, long wide skirts will be outdated by short and tight skirts, and slim dark jeans will be surpassed by light blue and flared. Consumers acting upon such trend variations (by updating to the latest trends) will indirectly contribute to a society built on planned obsolescence.

Perhaps the “worst case” of planned obsolescence is the situation where a producer deliberately designs and manufactures a product so that it will break easily or after only a few uses, either by making one or more components weaker than necessary or by programming a shortened lifespan into the product (for example in electronic software). Either the broken part will need to be replaced, which may be costly, or the consumer is encouraged to buy a new or similar item. A classic example is how easily the screen of an iPhone breaks and how the cost of replacing the glass is almost one fifth of the price for a new phone (i.e. 1300 SEK for repair and 7500 SEK for a new iPhone 6). According to some journalists, “planned obsolescence has been part of how Apple, and just about every other PC maker, has operated since time immemorial.” (See a video test comparing iPhone’s and Samsung’s screen breakability!)

Similarly, as for clothes, most of us have experienced how the new t-shirt quickly wears out as the fabric catches small holes and becomes asymmetrical in shape. A typical reason for this early quality degradation is a thinner and more delicate fabric and poor pattern-fabric matching. As for shirts and blouses, side seams that used to be double are today single, while buttons that used to be carefully stitched now easily fall off. When the garment break in the fabric, it is often difficult to restore its original look, while broken seams or lost buttons can more easily be fixed. Yet, many consumers would rather buy a new blouse than go through “the hassle” of fixing its seams or buttons (this, regardless of the fact that sewing a button takes about 10 minutes, while going out shopping probably takes a lot longer).

Although it may be understandable that companies wish to encourage customers to buy more and frequently (to uphold company revenues), this business strategy causes severe impacts on the environment, particularly in production countries like China, India, Bangladesh and Indonesia. Our modern fashion industry is in fact responsible for an alarming over-consumption of clothes, shoes and accessories, which also leads to huge amounts of fashion items being incinerated or dumped into landfills every year. In Sweden, the population consumed almost 132 000 tons of clothing and home textiles in one year (in 2008), of which an estimated 70 000 ton were thrown into the household bin and subsequently incinerated (source). In the UK, incineration of garments is not legalized (other than as household waste); instead, around 350 000 tons of unwanted clothes are sent to landfill every year (source). Meanwhile, the industry continues to manufacture new products. Thus, as we speak, large flows of raw oil are extracted to produce polyester clothes, huge amounts of water are diverted (from rivers, lakes and below ground) to irrigate cotton land, and substantial amounts of water, dyeing agents and potentially harmful chemicals are used to wash, dye, and treat fabrics and yarns, as part of the supply chain. The global fashion industry of today is clearly not sustainable.

Fortunately, the concept “circular economy” is changing the agenda worldwide. With the adoption of new circular business strategies, the fashion industry seems to be entering a new era of design and operation. Some large fashion companies now begin to rethink their business models and adjust their design practices to enhance product life expectancy. Weaker parts of a product are targeted in order to strengthen overall quality and to facilitate repair. Yet, few companies today would probably consider producing more long lasting styles (that is, lasting more than a few seasons) to discourage unmotivated shopping.

In sum, “planned obsolescence” as a business strategy is today being questioned, much thanks to the notion of circular economy. (An EU institution even called for a total ban on planned obsolescence in 2013.) Yet, while some fashion companies are now prepared to upgrade their product quality and reparability to create products that will last in durability, making products that will also last in style for more than a few seasons seems to be a far greater challenge. (For more, watch the film The Light Bulb Conspiracy!)

This article was originally written and published for Make it last on June 23 (2015). Republished here with permission.

What is circular fashion?

2015/06/14
Anna Brismar
Cirkulärt mode, Designstrategier, Fashion on demand, Hållbar konsumtion, Hållbar produktion, Hållbarhetsprinciper, Konsultuppdrag, Topp cirkulärt
This article was originally written for Make it last (June 1, 2015). Make it last: Circular fashion is quite a new concept in the context of sustainable fashion. How would…
Read More 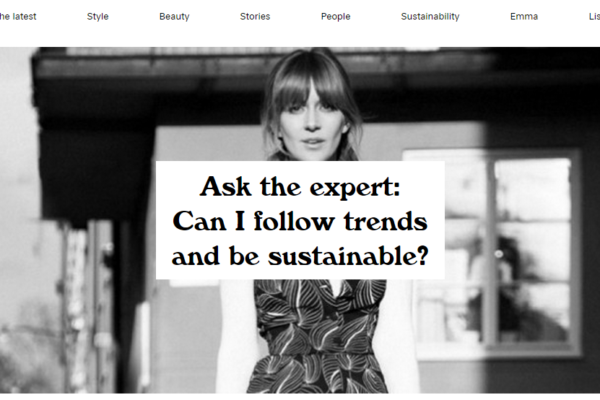 2015/02/27
Anna Brismar
Cirkulärt mode, Etik och mode, Hållbar konsumtion, Livsstil
This article was originally written for Make it last (February 27, 2015). Make it last: Fashion can be both about following new trends and finding your own personal style. How…
Read More
Load More